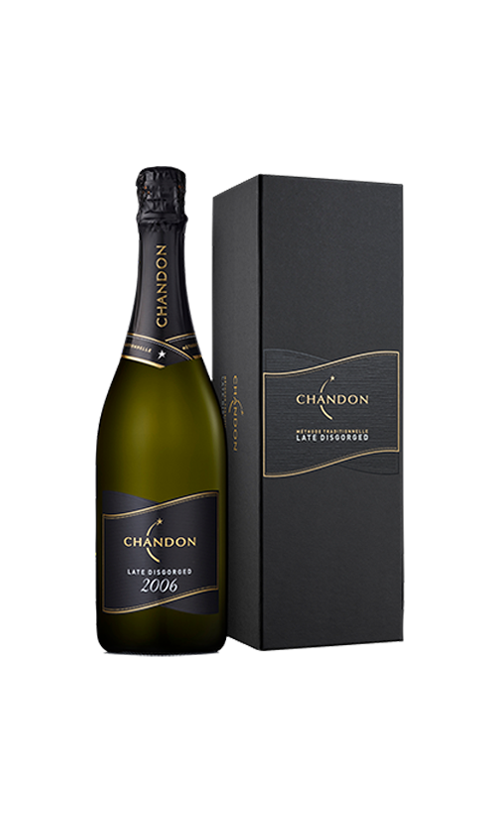 Age alone does not make a Late Disgorged wine remarkable. To retain youthfulness and vibrancy after all those years, a wine requires that rare confluence of quality vineyard sites, a winemaker’s patience and the transformational effect of time on yeast. For this reason, Late Disgorged represents the pinnacle of sparkling winemaking and a special piece of history.

TASTING NOTES
TASTING NOTES
Fresh pears and dried fruits are overlaid with layer upon layer of secondary complexity. Prominent characters include cracked wheat, whole grain bread, baked quince, pear tarte, coffee, cinnamon, toast, almond praline, and forest mushroom. The wine has intense savoury character and a creamy palate, alongside brightness and crisp acidity reminiscent of the crunch of an apple.
WINEMAKING
WINE MAKING
Grapes were picked at the onset of fruit ripeness during early February through to early March at 10.0° - 11.6° baumé. The grapes were picked in the cooler parts of the day to preserve quality and ensure minimal colour was extracted during the cuvée pressing. The grapes from each site were pressed and fermented separately to preserve their unique characteristics. Chardonnay, Pinot Noir and Pinot Meunier cuvées from the Yarra Valley, Macedon Ranges, Strathbogie Ranges, Whitlands Plateau and Tasmania were sourced for this special long-ageing wine. The wine spent over 10 years ageing on yeast, was disgorged in March 2017, and rested for a further six months before its release.
FOOD PAIRING
Food Pairing Notes
Truffle risotto; Reggiano parmesan shavings; Gruyere soufflé; Sashimi; Grilled chicken and pesto sandwich; Salmon and tuna tartare with wasabi and tahini dressing; Praline-chocolate cake
OTHER NOTES
Other Notes
A combination of relatively low yields, a warm summer and adequate spring rainfall led to the earliest vintage on record, with picking complete by Easter. Mild temperatures and no rain around harvest time allowed for ideal ripening of the fruit and the ability to harvest on the optimum date for each block. The sparkling varieties were of a high quality. Natural acidities held up well, particularly in Chardonnay, with good varietal characters evident. 2006 was a year that presented refined and delicate flavours with great complexity.
VINEYARD
Grapes were sourced from a range of the finest cool climate viticultural sites in the southern wine regions of Australia, including the Yarra Valley, Strathbogie Ranges and Whitlands Plateau. At a range of altitudes from 250m to 820m elevation respectively, the location of these vineyards brings cool nights, allowing the slow development of Chardonnay and Pinot Noir flavours while retaining terrific natural acidity.